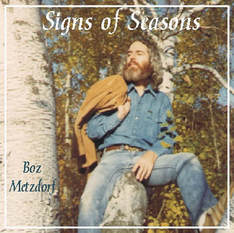 Growing up in White Bear, Minnesota, a rural town with lots of wide-open spaces, Boz spent much of his childhood exploring the woods, fields and marshes. An artist from the start, when he wasn't catching frogs or searching for birds' nests, he was probably drawing. This love of nature and art is reflected in the music, which started to take shape when at age sixteen, he picked up an old Stella guitar.
He went to art school and spent the last two years of college at the University of Minnesota in the studio arts. "I would be on the West Bank sketching and walk over to the budding coffee house scene, where Dylan and other folksingers were starting to stir up the pot. I was playing in a band at the time and had written some songs and decided to pursue the music. You can't have lived through the Sixties and not have been influenced by Dylan and the Beatles." There were others: the Byrds, Buffalo Springfield, James Taylor, Jackson Browne and the Tin Pan Alley composers of the Twenties and Thirties, Berlin, Gershwin and Kern.
Songwriting is a passion with Boz. "I'm in love with the creative process, the marriage of lyric and melody. The songs basically document my life, the mundane and the mystical, a musical journal and journey. It's how I work out problems and celebrate life. Each song is unique with its' own individual DNA. I don't think about what style a particular song will be, but let the song dictate its' own outcome. That way a freshness can emerge that's more interesting to me as an artist, as well as to the listener.
From acoustic love songs like Lucky Stars, to hard hitting electric rock like Passenger Pigeon, the range of songs express many different emotions. It's impossible to pigeonhole Boz's songs, a body of work that's both eclectic and mercurial. Songs like Prairie Island and Chinese Junk don't shy away from issues of environmental degradation, racism and human rights. "Social consciousness did not die in the Seventies but it was buried in landfills in the Eighties and is now seeping up again out of the ashes. Artists are not elitists as some would have us think, but human beings with their antenna up, feeling for what's out there, probing beneath the surface."